We arrived at Ascension day and it nearly took me by surprise, the Season of Easter had passed so quickly. So I had a day of worship, morning prayer and Eucharist at the Cathedral, then following a meeting of the Church in Society Committee I presided at the Eucharist in my Oratory at St Duthac’s. Evening Prayer was followed by a Choral Eucharist at the Cathedral and following Compline at Arpafeelie I was ready to sit down and reflect on a good day.

Friday was a very different day, or I should say a very different evening. I had been invited to attend the Highland Business Dinner at the Drumossie Hotel. We had a great evening, the food was good, the speaker was John Simpson of the BBC who spoke about his life and work and the chat around the table was brilliant.  Many thanks to Vicki Fraser  of John Fraser and Sons for the invitation and hospitality.

On Saturday it was back to meetings, this time the annual meeting of Diocesan Lay Reps and Treasurers.  We met at St James’s, Dingwall, I celebrated the Eucharist and then we got on with the business, lots of forthright and useful conversation. As always it was good to meet up with the people of the diocese. 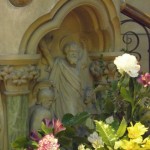 I was in the Cathedral on Sunday and what a day we had, the family Eucharist was busier  than usual as we were joined by a large party of Americans who were on a cruise and had rushed down from Invergordon to be in time for the service.  The service ended and as we prepared for the Choral Eucharist one of the sidespeople rushed into the vestry and asked me what we should do. I looked out and the cathedral was full to overflowing. People were wandering around the building, some were lighting candles others were photographing the high altar. I simply said that we carry on as usual and if they want to stay they can, but I suspected that once we got started then the noise and bustle would end and so it proved. Many did sit down and join us, some stayed the for the full service, others slipped out after a brief prayer and we had no problems. The rest of the day continued with coach after coach pulling up outside the cathedral, and we were still welcoming them as we sang Evensong, the doors eventually closed at 7.00pm what a great day with so many opportunities to talk about our faith.