Gordon Chapel was built in 1834 to a design by Archibald Simpson, funded by George, 5th Duke of Gordon, and Duchess Elizabeth to serve as a place of worship for the Episcopalians of Fochabers who had been meeting in a thatched cottage for some 50 years. The church was built on the first floor with a schoolroom for the education of the local children on the ground floor – a unique design at the time.

In 1937, following the deaths of two successive Dukes in the space of 7 years it became Crown Property until the local congregation raised money which was supplemented by a grant from the Dunderdale Trust and purchased the building in 1950. At this point the Gordon Chapel became fully incorporated into the Diocese of Moray.

One of the most striking features of the church is the stained glass, made mainly by the William Morris Company to designs by Edward Burne-Jones and in memory of several members of the Gordon Family. The most recent is in memory of William and Ethel Baxter who instigated the fundraising to buy the building and was designed by Petri Anderson of Chapel Studios and is in keeping with the rest of the windows. 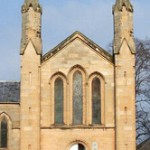