Episcopalian worship continued in the Dingwall for some time after Presbyterianism became established in Scotland. It was only after the death of the Reverend John MacRae in 1704, that Episcopalians held their services in private houses around the town, until the Chapel in Castle Street was built a century later.

In 1851 the church, which faced north was demolished, and a new one, facing east, was erected on the same site. The new Gothic church, designed by the influential English architect, J L Pearson, was consecrated in 1854, but survived less than twenty years.

In 1871 it was severely damaged in a great fire which gutted the entire building. Restoration work began immediately and it was rebuilt along the lines of Pearson’s design by Alexander Ross of Inverness.

Around the walls of the church can be seen the Coats of Arms of the seven Dioceses of the Scottish Episcopal Church. The eighth is the Coat of Arms of the whole Church.

Sunday 10.30am – The form of service is usually a Sung Eucharist and the venue alternates between St James’ the Great, Dingwall and St Anne’s, Strathpeffer.
For service times and venues please see the home page.

Services are suspended during the Covid19 pandemic, please contact the Priest in Charge if you want to hear about the digital worship of the congregation. 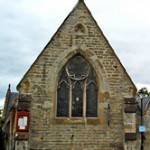