St John’s was established as an incumbency in 1688, although possibly it began two centuries earlier, when it was established by the Bishops of Ross, or perhaps by the Knights Templar, on what was probably a Culdee settlement in the old Celtic Church.

The first church lies in ruins near Allangrange House (across the busy A9) and the second Church, adjacent to the present, later became Arpafeelie School and is now a private dwelling house. You can see the gable-end with its round window, a remnant of the time when the Episcopal Church faced persecution under the Penal Laws, when this would have been the look-out window.

It is believed that the present Church was completed in 1816, making it the oldest Church in the Diocese. Services were conducted in Gaelic until 1899. A feature of St John’s is its fine carved oak altar and reredos. Another unusual feature is the fact the bell-rope for the church bell hangs outside the church. The Church was re-opened in 1974, having been closed for some years.

Arpafeelie Rectory is now the Bishop’s residence with the old Steading converted into the Diocesan Centre.

Holy Communion every Sunday 9.45am. 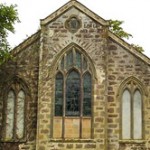