St John’s is the oldest Scottish Episcopalian congregation in Inverness. According to the records, the Reverend Hector Mackenzie, Minister of the Parish from 1683, was ‘a staunch upholder of Episcopacy, and declined to accept the new system (presbyterianism) at the Revolution, but continued to perform his duties as Parish Minister’. On 14 October 1691, Hector Mackenzie, along with his people, were extruded from the Parish Church. Thus began the history of St John’s, although for many years following, they worshipped in secret.

At the end of the hundred years’ persecution which followed the 1688 Revolution, Episcopalians met for a time in a small Meeting House on the Maggot. The present church is the third to bear the name of St John in Inverness. The two previous buildings stood on different sites on Church Street The first, at the northern end of Church Street, was erected in 1801. The second was built on the same side of Church Street, but nearer other end, and was consecrated in 1839. The second church remained until 1903 when the greater part was demolished.

Materials from the old church were used to enlarge the Chapel of St Columba, originally a Mission of the Cathedral, which became the third St John’s in 1903.

The splendid stained glass windows behind the altar came from the second St John’s in Church Street.

St John’s most famous Incumbent was undoubtedly Dean Charles Fyvie, Rector from 1819 to 1850, whose diaries, most of which are in the National Library for Scotland, give a fascinating glimpse into Scottish life in his time.

Family Eucharist : Sundays at 11am
Holy Communion Wed 11.00am. 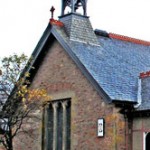