The Church of St Michael and All Angels has its origins on the opposite side of the River Ness on the Maggot Green as the Chapel of the Holy Spirit.

In 1877 Canon Edward Medley, who had come to St Andrew’s Cathedral was struck by what he described as “the great respectability of the congregation of the Cathedral”, with “scarcely a poor person” amongst its numbers.

Canon Medley, with Bishop Eden’s encouragement, rented a thatched cottage and started church classes. Soon the adjacent cottage also had to be purchased to accommodate the many children in the area. In 1881 Bishop Eden sanctioned the title of “The Mission Chapel of the Holy Spirit”. A stone church was built in 1886, close to the Maggot Green, in Factory Street.

By the 1890’s the Maggot Green was suffering great problems of dampness caused by the river overflowing its banks. The people around the Church had moved to drier land on the other side of the River and in 1902 it was decided the Church should also move. Between 1903 and 1904 the Church was dismantled stone by stone, moved across the River Ness, where it was rebuilt and dedicated to St Michael and All Angels.

The new High Altar, with its riddel posts topped by gilded angels was designed by Ninian Comper, as is the Font, with its lofty steeple cover.

Between 1923 and 1924 extensive improvements were made to the church under the guidance of Ninian Comper. The magnificent east window of the Archangels and the Gilded Tester, both by Ninian Comper, are memorials to Canon William Lachlan Mackintosh (the first Rector - shown kneeling beside St Gabriel, in the third window).

Sir Ninian Comper’s influence is much in evidence in St Michael’s. His famous ‘signature’ of a strawberry is seen both in the bottom right corner of the right hand window and (unusually) carved on the wooden font cover.

Family Mass Alternates monthly between 9.45am and 11.15am
(see St Michael's webpage for current month)
1929 Scottish Liturgy 3rd Sunday of the month 6.30pm.
Compline and Benediction last Sunday of the month 7pm
Weekday Low Mass on Tuesdays at 10.00am 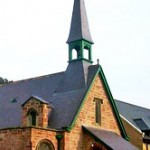