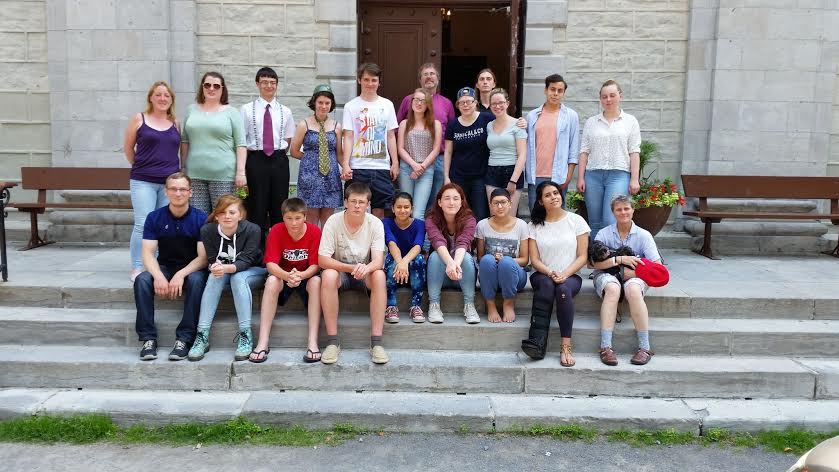 Well we have made it, after three years of fundraising and many hours of planning we set off from Inverness at 5.30pm on Friday 3rd July. Nine representatives of the diocese heading for Edinburgh where we were joined by two more who had travelled via Aberdeen.

Then, once I had figured out how to get the tickets, we headed for the airport by tram. A short nights sleep at the airport and then at 0600 we headed through security. The plane left a very wet and windy Edinburgh and arrived in a very hot and still Toronto. Here we lost one of our number as Clare was whisked away by customs! We found her in time and rushed over to the domestic gates and set off on the final leg to Quebec. The flight along the St Laurence gave us great views and in a short time we descended into Quebec.

We were met by +Dennis and the taxi party and we were led off to our accommodation. After supper at Bishopthorpe everyone headed off to bed, exhausted but  very excited at being in such a lively and interesting city.

On Sunday we all gathered at the Cathedral and were made so welcome, members of the congregation came to speak to us as we settled into the box pews, we met friends old and new and Christian, the Dean led us in worship. After the service we lunched at Bishopthorpe and then headed out with Guy for a guided tour of Quebec city. In the evening we watched one of the productions that Aidan Strange has been working on during his year in Quebec.

Monday and we were up and off early to visit the Citadel of Quebec, we had a guided tour and then watched the changing of the guard, including the regimental mascot, a goat called Baptiste. We then visited a museum which charted the history of the battles around the Plains of Abraham, by now the heat was too much for us Scots so we hid under a tree and ate lunch. Ian one of our Canadian friends actually hid in the tree and got stuck!

We discovered that Abraham Martin for whom the Plains are named now runs a bus tour ( at 275years old) and is still quite agile!!! The bus trip gave us an alternative view of the battle very interesting but Hannah fell asleep.

We then split up, +Mark went off for a meeting, Jamie headed into Quebec to play the Cathedral organ while the rest of us headed down 368 stairs to an open air swimming pool down on the banks of the St Laurence. We all got sunburnt and waddled back up the steps and back to Bishopthorpe for dinner. Once again we said night prayer in the bishop’s chapel.

On Tuesday we had a slower start as we were going to spend the day exploring some of the suburbs to the East of the city. We all set off from The Marrack household and headed down hill to catch the bus out to the Domaine de Maizerets, a country park and site of a former monastic farm. There were lots of questions asked about the housing and the way of life of the people whose streets we were walking through, it all seemed so different from home.

After  walk around the Parc, a run around the maze, a climb up the observation tower and a paddle in the pool we headed back to the bus stop, a journey that took us across the railway line and another culture shock, the railways have no fences around them!

The bus then took us to the Montmorency Falls, a really spectacular waterfall which drops over the cliff before entering the St Laurence. The falls are crossed by a suspension bridge and have a very long flight of steps to take you down to the bottom, there is also a cable car for those who would rather save energy. We walked down the steps and back up them so that +Mark could get a photo of us getting below the falls, we all managed easily, he didn’t!

We were picked up by the car convoy and taken over to the Isle D’ Orleans for a barbecue and get to meet you session at the farmhouse owned by the Blair family. Some of us went swimming in the open air pool and we all met Aldo the Donkey who usually lives at Bishopthorpe but has his holiday here every summer. After a great feed we played some games and then headed back to the city and bed.

We headed for the Eastern Townships on Wednesday.  We were staying at the Rectory of St George’s Lennoxvillle the home of Fr Edward Simonton, Archdeacon of St Francis and former ordinand at Coates Hall Edinburgh. Many of us already new Fr Edward from his time with us two years ago. The drive over took much of the day as we explored the villages and towns alongside the river.

The evenings fun started with a barbecue and lots of watermelon, then we were joined by members of the deanery congregations who came to listen to a talk on the history and life of our Diocese and to ask us questions. They asked a lot of questions and then spent time chatting to us all.

On Thursday we woke to a great breakfast, left over puddings from the night before and left over pizza, most of us loved it! We then drove over to North Hatley to visit St Barnabas’s Church and the most amazing antique shop, from there we drove to Magog and alongside Lac Memphremagog until we arrived at Abbaye De St-Benoît-Du-Lac, a large and very impressive Benedictine monastery. Then we headed onwards until we reached Stanbridge East and the home of Ven Peter Hannen, another swimming pool, a game of Croquet and a dinner of artisan, Canadian sausages! From here we drove on to Coaticook and the annual Foresta Lumina – a light illuminated night time pathway through a dramatic gorge, telling a story by hologram, lights and voices. It was as magical as  it was brilliant.

Back to Quebec City on Friday and an afternoon of free time for most of us and more meetings for +Mark.  By now the heat was amazing and many of us were looking for sheltered places to sit and swelter. We had another barbecue this evening, this time at Jill Marrack’s – great food, really good chat and lots of very happy pilgrims.

Saturday was a day that will remain with us for a very long time, we caught a coach to Baie St Catherine and after a three hour drive along the Northern shore of the St Laurence River we arrived at the jetty. We all got into our floatation suits and headed down into the Zodiac Boats. The day was overcast and the rain started but that didn’t matter as we began to see whales surfacing and diving a around us, we saw Fin Whales, Minkie Whales and Baluga Whales, it was brilliant, moving and inspiring. After three hours on the water we drove back to Quebec city as a huge electric storm crossed over, the lightening was spectacular.

Back at Jill’s we were joined by some members of the Cathedral Congregation as we were treated to a traditional Quebec meal.  Poutine (chips, gravy and curd cheese) pea soup, Pâté Chinois, Tourtière and rhubarb pie and sugar pie with maple syrup! A Feast!

On Sunday +Mark preached at the morning service in the Cathedral and Jamie sang in the choir. We thought about and prayed for the Diocese of Bujumbura and the difficult times they are experiencing . The choir sang a lovely setting of the Deep Peace prayer in our honour and + Dennis and +Mark processed together to send us out as friends and pilgrims, a very moving and thought provoking ending to our worship together.

In the afternoon many of us explored downhill Quebec and we also prepared ourselves for the delights of moose stir fry, it was really delicious! In the evening we attended a performance of the theatre group resident at Bishops house where we were treated to a cabaret by the talented young people of the Diocese of Quebec and their musical director Aidan Strange . The wonders of nature, music, companionship, worship and food! Monday was our last full day in Quebec and a feast of opportunities were offered to us, visits to museums and historic sites or the local 17 flumed water park. Needless to say most of the party wanted to go to the water park and +Mark realised that he would have to join them just to make sure we were all safe of course!

The park was great but the temperature was really high, so high that walking on the paths in bare feet was really painful, but the flumes and slides were brilliant and we all had a great time. All to soon it was time to return to the city and catch up with the intellectual part of the group.

In the evening Aidan had arranged a  ceilidh  and in the bishop’s chapel we danced and sang. The band consisted of one piano and two fiddles with a guest appearance by our own Jamie. We taught and danced all the usual dances and managed a two set eightsome reel before a final song and Auld Lang Syne. Then lots of hugs and the beginning of the farewells.

The following morning everyone gathered in front of the cathedral and a last group photograph before we piled into the cars and headed for the airport. The flights home were long and started with everyone being a bit quiet but by the time we arrived in Edinburgh, the sparkle had returned and the excitement of being home had begun to show.

Jamie left us at the airport, Hannah and Clare at Haymarket to catch the train up the east  coast to Aberdeen while the depleted team headed via Stirling to Inverness. We arrived home and after greetings and farewells we left +Mark at the station still counting us as we drove off.

I have returned home to Bishop’s House with an intense feeling of pride in our group of young people, they were wonderful ambassadors for this diocese and for the communities they come from. At no point on this journey did I have to raise my legendary cross voice, well only  once at the waterfall. I listened to the people we were living amongst and they were all so impressed with the behaviour, manners and complete involvement of our young people in everything we did.

So to Claire who kept them all in order at Jill’s house, to Matthew, Sean and Jamie, Alexia, Alex, Mara, Hannah and Beth, thank you from Jane and myself, you made this trip s very special. I would also like to thank the congregations they come from for the help and support they gave them and the fundraising they undertook. I also thank the congregations who raised funds even though they were not sending a delegate, and fianllly the Provincial Overseas Committee that gave us both financial and spiritual support .

Finally, thank you to all the people of Quebec who opened their home and their hearts to us.