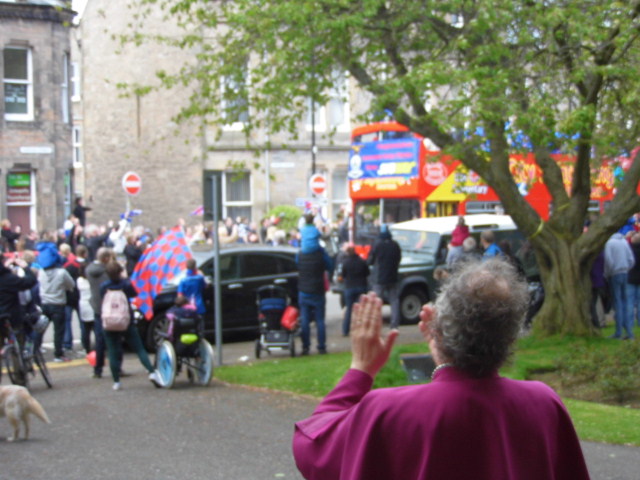 Trinity Sunday found us in St Andrew’s Tain for a joint service of the Tain and East Sutherland congregations, the church was well filled and the lunch afterwards was as good as it always is in the meeting room at Tain. Mind you we didn’t hang around too long as we needed to be back in Inverness to see the triumphant football team arrive at the Northern Meeting Park. I had arranged for the bells to start ringing as the team crossed the river and headed past the cathedral on the open topped bus. I stood at the cathedral door in my cassock and was amazed by the number of people who wanted a photograph standing beside me!! As the bus passed Jane took a photo of the team, a week later I received a Tweet from the club that had a photo of me taken by the team from the top of the bus.

The beginning of the week consisted of a lunch meeting of local clergy, Diocesan Standing Committee and our Pre Synod meeting and on Thursday we welcomed the staff and volunteers o f the Highland Hospice to the Cathedral for their annual awards ceremony. It was so good to see so many dedicated and caring people receiving awards.

The weekend was busy as the Glen Leadership team was with us and therefore every part of the house and the steading was full of people.  In the middle of all of this as Jane prepared meal for twenty five, I conducted a wedding at the cathedral, a lovely event followed a super meal with good company at the Bunchrew House Hotel, thank you Neil and Claire.

I was at the cathedral on Sunday and then I began to prepare for the meeting of General Synod in Edinburgh.  We left for  Edinburgh  on the Wednesday, the diocesan party was staying at the Ibis Hotel in St Andrew’s Square and it was good to spend time chatting with everyone. The meeting began on Thursday morning  and was dominated by discussions on marriage, though many other important matters were also discussed. I suspect I surprised some of the synod members by talking about my own personal relationships and declaring that love isn’t something you choose- it chooses you.   The issue of gender doesn’t always come into it. 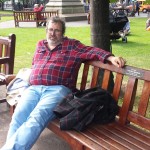 Synod ended on Saturday lunchtime and Jane and myself headed to Bishop’s House Edinburgh to spend a couple of nights with +John and Claire. We had a great time wandering around Edinburgh and joined the congregation at Old St Paul’s for the morning Mass. On Monday and Tuesday I attended a College of Bishop’s meeting and Jane headed home.

I got back to Arpafeelie on Tuesday evening and then headed over to Elgin on Wednesday morning for the funeral of Neil Brown a well loved member of the local community. The next few days were catch up days as I  sorted through E mails and letters, many commenting on my statement at General Synod, I was also beginning to realise that I would need to make a response to the questions being asked by the local press.