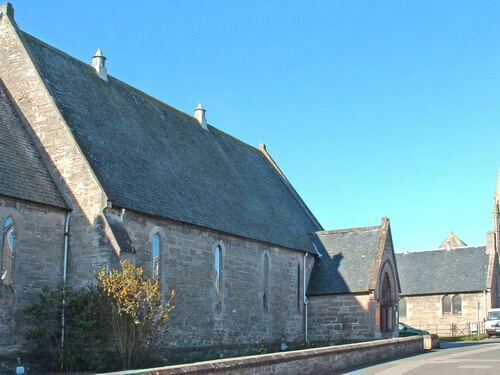 The fair town of Forres beckoned to us on Sunday.  I was to confirm Isabella Mackenzie at St John’s and knew that many old friends would be there to greet us. We were not disappointed and it was good to catch up with so many people, lunch at Inverugie House was a delight and as always the conversation was lively and stimulating.

We drove back through to Inverness for the first of a series of Lenten Discussions in the Cathedral, today it was me talking about Holy Week liturgy!

All was going well, I had a day off on the Monday and a few meetings on Tuesday when I suddenly realised that I was croaking like an old bull frog and that my nose was beginning to block. The cold I had fended off for months hit me like a sledge hammer and I even agreed to have a day in bed, though I was bored by lunch time and sat downstairs wrapped up in blankets. Appointments were cancelled and I did what I was told!

Back to work on Thursday with a lunchtime meeting with Canon Mel to discuss the liturgy for the Chrism Mass and other liturgical matters and then an afternoon in the steam room at the gym to help sort me out. (All is better except a dreadful cough which seems reluctant to leave).

The Lent Talk on Sunday was led by Canon Christopher Ketley who gave us a very thoughtful journey through some of the words of the Church Fathers, and yet again a good number turned up to listen.

The weather turned very wintery again on Monday and by Tuesday we had a thick covering of snow on the hills around Arpafeelie. Today I was to bury Rev Colin Mylne, the husband of our priest in Glenurquhart. The burial was to be private and I picked Christine up from the church cottage and drove up to Loch Meikle and into deep snow. The service was brief but powerful, especially there amongst the mountains and the dazzling white of the snow. I returned the following day to lead a requiem Eucharist and we shared in stories of Colin’s ministry among us, a man who when asked to pray for someone took his ministry very seriously, I had always felt surrounded by his prayers.

I had an interesting time on Friday afternoon as I spoke about our church and our beliefs to a group of day patients at the Highland Hospice, searching questions but lots of laughter as well.

The week ended with a trip to the lovely church of St Columba’s, Nairn. Dean Alison was leading worship in the Cathedral and I was let loose on the congregation in this lovely seaside town. The congregation were as welcoming as ever and it was a pleasure to worship with them. The Lent Discussion was led by Canon Ian Pallett and it was a fascinating talk about the language and theology of the cross. This was followed by a 1929 Prayer Book Eucharist, during which everyone looked very smug at the word “Propitiation” which Ian had discussed earlier.