After the opening peal in 1877 by the College Youths, only one other peal was rung on the bells before they were augmented to 10 in 1973.

Between then and 2010  35 peals were rung all by visiting bands although one in 2009 had 5 Inverness members in the band.  In September 2010 eight Inverness ringers rang a peal of Grandsire Triples, the first by a local band 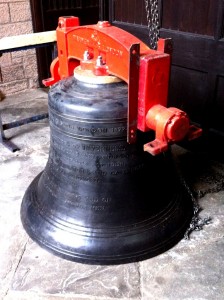 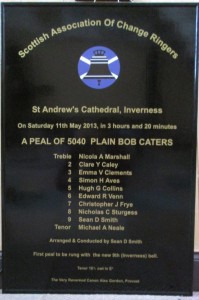 A third peal board now hangs in the tower to record a peal  rung on remembrance week end 2014 to mark 100 years since the start of WW1 by Scottish Association members.  5039 changes of Grandsire Caters.  The board especially remembers  Fredrick Harold Winchester, killed in 1917, who was both secretary and treasured of the Cathedral’s Bellringing Society by 1912.

In 2014 we excelled by ringing 17 quarter peals on the tower bells, more than any previous year.

In 2017 the total was 14 which included a half muffled Quarter on the centenary of the death of Fredrick H Winchester a ringer at this tower, killed on the western front  and on a more joyous occasion two quarters were rung when Clare Caley was ordained a Decon by Bishop Mark Strange.

In December we learned that Peter Shipton had sold Druim Croft and is moving to Ayreshire, a final Quarter of  Plain Bob Triples at Nairn then although we had been hoping to secure a new home for the bells from Druim Croft we now had to act fast.            So as not to lose them from the area, over Christmas the bells and tower were dismantled and put into storage  that site is now clear.

Unfortunately the hoped for new site near the Cathedral has shortsightedly been rejected by the Cathedral vestry.  We now have to find a new site.

As a farewell to Peter We rang a Quarter Peal of Plain Bob Triples before practice at the Cathedral on Thursday 25th January. Peter and his wife Aileen came up the tower as we finished and were presented with a memento of his time in the highlands.