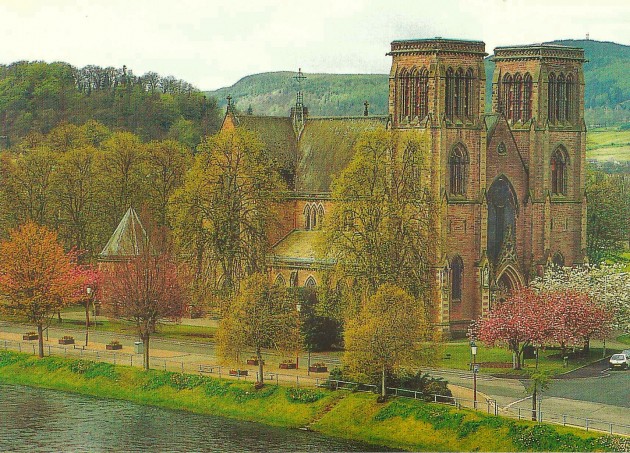 We hope you enjoy your visit to our Cathedral and to the Scottish Highlands.

If you are bringing a group to the Cathedral please let us know in advance (01463 225553) so that we are able to provide the best welcome we can.

The Cathedral is the work of a local architect, Alexander Ross (1834-1925), himself a member of the congregation. The foundation-stone was laid in 1866 by Dr Charles Longley, Archbishop of Canterbury, the first official act in Scotland by an English Archbishop since the establishment of the Presbyterian Church in 1689.   The Cathedral was opened for worship in 1869, and services have been held here every day since. 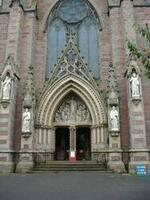 The arches of the nave are supported on pillars, each carved from a single block of granite. The capitals were carved with foliage, flowers and birds, by local masons who had never before undertaken such elaborate work.  Above the capitals are carved faces – the first two on the left are of Bishop Maclean and the architect, and those on the right are of Bishops Kelly and Eden; it is not known who the others are. 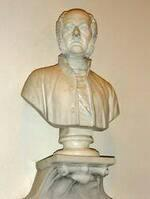 Turn left towards the north aisle (3). A picture celebrates the consecration of Samuel Seabury, the first American bishop, by the Bishops of Aberdeen and Moray in Aberdeen in 1784 — hence the special ties between the Episcopal Churches of Scotland and the U.S.A. (note the flag above the picture). The bust on the wall to your left (4) commemorates Bishop Robert Eden, whose vision for the Diocese inspired the building of the Cathedral. He was elected bishop in 1851, and moved to Inverness from Elgin two years later, founding a new congregation which met in a chapel in Bank Street.  He was elected Primus of the Scottish Episcopal Church, and remained as bishop until his death in 1886.

The 19th century Russian ikons (5) were presented to Bishop Eden by Tsar Alexander II when he visited the Anglican  congregations in Russia in 1866. The central one is of Jesus Christ; to its left the Trinity with a group of name-saints, and to its right another ikon of Christ; beneath, ‘the Saviour not made by hands’ (the image of Jesus’s face in the cloth with which, legend says, Veronica wiped His face on the road to Calvary), and an 18th century embroidered ikon of St Michael the Archangel and St John the Warrior.

The stained glass windows were made by Hardman’s of Birmingham; those in this aisle depict Jesus’s teaching and miracles. The picture (6) of Our Lady and the Christ-Child is from a painting by the 15 century Sienese master, Sano di Pietro. With its stand for candles it is a focus for prayer, and to the right is a board on which anyone may ask for the prayers of worshippers in the Cathedral for their own special concerns and needs.

The north aisle leads to the Lady Chapel (7), where services are held during the week. On the wall to the left is a marble memorial plaque (originally in the Old High Kirk) to Bishop William Hay, who died in 1707. The picture is an early 19th century copy of Raphael’s Madonna del Granduca. The  large window shows the Ascension.

The pulpit (8) is of Caen stone and Irish marble, supported on columns of granite from Abriachan, and was carved by the  local sculptors, D. & A. Davidson The panels depict St Andrew preaching from the cross, the Good Shepherd, and John the Baptist preaching.   The chancel screen (9), the work of Sir Robert Lorimer (1923), is a memorial to those members of the congregation who died in the First World War. The names include a Victoria Cross winner and a chaplain.  Above it is a hanging rood (crucifix) with the symbols of the 4 Gospel-writers on the arms.   The brass lectern (10)), from which the Scriptures are read, is a link with the Cathedral’s origins, being the gift of the last priest to serve the Bishop’s Mission Chapel.

Pass through the screen into the chancel (11)!, with its stalls of Austrian oak, a memorial to Bishop James Kelly, Bishop Eden’s successor (see the inscription behind the bishop’s throne).  The symbols of the evangelists (eagle, bull, lion and angel) are carved on the stalls. The bishop’s throne (‘kathedra’ in Greek) carved locally, is the only surviving piece of the original woodwork in the chancel – it is the symbol of the bishop’s authority and office as a teacher and leader of mission, and makes this a ‘cathedral’ church.

The sanctuary is apsidal (one of the many echoes of French Gothic architecture in the design), and the windows depict Jesus in Gethsemane, the Crucifixion, and the Resurrection, and these themes are repeated in the reredos above the high altar (12), at which the main Eucharist is celebrated each Sunday and festival.

As you return through the chancel, look up at the great ‘west’ window, with a vivid representation of our Lord in glory at the Last Judgement, the diocese’s memorial to Bishop Eden. It is one of the largest stained glass windows in Scotland, and remarkable for its colours since it never receives direct sunlight.

At the front of the ‘south’ aisle is the Chapel of St Andrew (13)#, created as a memorial to the wife of Bishop George Sessford.   The windows in this aisle tell the story of the early life of Jesus from the Annunciation to His work in Nazareth at the carpenter’s bench.  The white ensign (the flag of the Royal navy) hangs here for safe-keeping after use on the Cenotaph in London.

The font (14) is a copy of Thorvaldsen’s kneeling angel font in Copenhagen, but the face is that of the donor’s wife. The picture in front of it records an incident in the dark days after the Battle of Culloden (1746), when the Episcopal Church was proscribed, and its clergy were imprisoned for conducting public worship: Stonehaven fisher-folk are shown holding up  an infant in a creel for baptism at the hands of their imprisoned priest, through the bars of his cell.

In the narthex (15) is a painting by the architect of the original design for the Cathedral, complete with 100’ (30m) high spires, which were never built.  The towers are 100’ high, and the one nearer the river houses a ring of 10 bells, cast by John Warner & Sons of London, together with a service bell.  The bells are rung on Sundays for the 11.00 and 6.30 services; they can also be chimed to play melodies.

The cathedral is built of local, deep pink sandstone with limestone dressings; the roof is of green Westmorland slates. The ridge of the roof is 88’ (27m) from the ground. At the crossing is a Celtic-style cross, made of copper, a substitute for the original fleche, which became unsafe and had to be removed in 1963.

Above the West Door

Over the ‘west’ door is a gable of pierced tracery, and a sculpture of Jesus’s commission to the Apostles, “Go into all the world and preach the Gospel”. The flanking statues are of Saints Andrew, Peter, Paul and John the Baptist.

At the rear of the cathedral is the octagonal chapter house and beside the cathedral is the Old Boys’ School  which in summer ( June to October in 2016) houses the Cathedral Cafe and Shop,  where visitors can find refreshments and souvenirs.   Across the car park stands the former Bishop’s House, Eden Court, now  incorporated into the theatre which perpetuates the name of  the cathedral’s founder.

We hope you have enjoyed your visit to the Cathedral. Please do not leave without spending a few moments in prayer,  thanking God for all his blessings, and praying for the clergy and congregation who seek to develop this beautiful Cathedral as a centre of Christian devotion and service.    The building is maintained entirely by the voluntary gifts of the congregation and our visitors, and we should be grateful if you would make a contribution to our future work before you go.

Thank you for your interest, support and prayers. May God  bless and guide you on your journey.