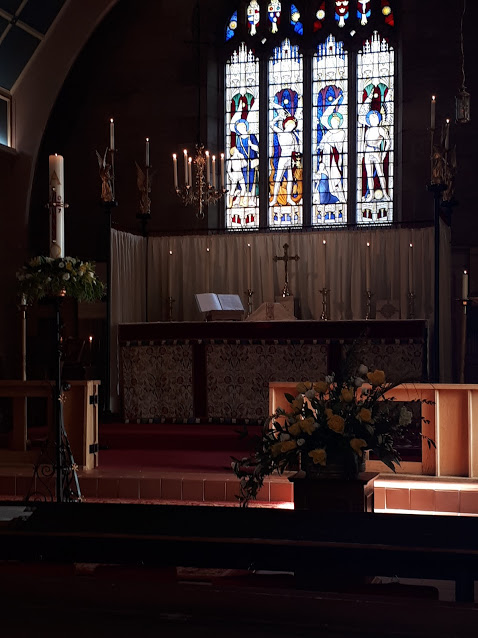 We got back from Shetland in time to drive straight to St Michael and All Angels in Inverness to celebrate the life and witness of Canon Mackintosh. Canon Mackintosh had been instrumental in the creation of this Church and the growth of the congregation. He had moved the church from one side of the River Ness to the other as the people were rehoused in new housing on the North Side. The congregation is of the Anglo Catholic tradition and we celebrated High Mass with Very Rev Gerald Stranraer-Mull preaching. We returned to St Michael’s on Sunday morning as we continued the celebration and I celebrated and preached at the morning Mass, this was followed by a splendid St Michael’s lunch in the hall.

I drove up to Dufftown on Tuesday as I had the privilege of conducting the funeral of Mrs Alice Young, one of the longest standing members of the congregation at St Michael’s, Dufftown. The church was packed and as we drove down to the graveyard the snow was falling heavily, as it did on and off for the rest of the day. The plate of broth at the Stewart Hotel was most appreciated.

The rest of the week was taken up with meetings – with ordinands, ministry teams, a quick trip to Edinburgh for a meeting of the Provincial Standing Committee.  On Sunday, we drove over to Elgin to worship with the congregation at Holy Trinity and to bless a new icon made for the church. It was lovely to be back in our old church in Elgin and it was good to meet new members of the congregation and to greet old friends. There was a shared lunch after the service and we shared stories and caught up on family news, it was a good time. We then had to drive up to Dufftown for a congregational meeting where we looked at future plans for the church and grounds.

The following week included a trip to Aberdeen.  I first drove through to Insch for a meeting with a local ordinand and then on to Aberdeen for a time of office work and a meeting of the Cathedral Chapter. I then did something rather foolish!  I had failed to notice a Congregational Meeting in Dornoch that evening, so I drove back to the Black Isle straight past the house and onto the Dornoch Firth. I have to say, however tired I was, the meeting went really well and a future plan of ministry and mission in the North East of the Diocese was accepted and welcomed.

On Saturday we joined the congregation at St John the Evangelist, Inverness for their patronal festival on the Feast of St John at the Latin Gate, it was a good service and the fellowship afterwards was also splendid and it was good to chat with the congregation.

We drove over to Forres on Sunday for both the early service and for a confirmation service at 10.00am. The service was joyful and Douglas answered with great determination and conviction, he was great – as was lunch back at Inverugie House.