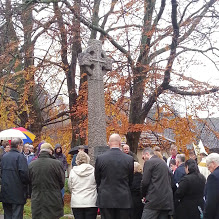 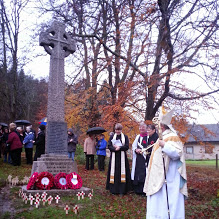 An amazing thing happened this week; we had a meeting of the Cathedral Chapter in the Chapter House. This momentous event occurred near the end of a long week of meetings, meetings about finance, mission, buildings, youth work, and you name it we met about it. I have to say though that a great many exciting plans are coming together and thank you to all who are working so hard. The Chapter meeting was an opportunity for the Canons to see into the furthest recesses of the Cathedral.   They were escorted up the towers, through the library, a quick look at the archives, a tour of the bell chamber and time looking down at this wonderful building from the West Gallery. I think everyone enjoyed it. That evening Jane and myself joined the ladies and gents of the Pilgrims Table (the cathedral tea bar) at the Palace Hotel where we had a very enjoyable dinner.

The week ended with the annual arrival of the Mackenzies of Elgin with trimmers, saws, tractors and hard hats.  Jim and Helen along with members of the family descended on Bishop’s House and within a day the hedges and the shrubs had been knocked back into shape, and we  all sat and talked the night away.

Sunday was Remembrance Sunday and following the three morning services at the Cathedral I walked over the Infirmary Bridge to join the City’s Act of Remembrance at Cavell Gardens.  There was a large crowd this year and once again the youth organisations of the city were well represented. The trip back over the suspension Bridge was rather exciting as there were probably too many people on it at one time, when I was young it was great fun, now I just hung on to the rail.

It was time to head for Edinburgh, a meeting of the Standing Committee and then two days of College of Bishops,  I have to say that the work load seemed particularly heavy and it required conversation with lawyers, solicitors and even a full contingent of Scottish Deans – I rather enjoyed that bit. I got back to Inverness just in time to attend the AGM of the Cathedral Bell Ringers and it was amazing the things I learnt. I have never rung a change ringing bell and loved listening to the discussions on what would happen next year, Peal attempts, open days and training sessions, it all sounds really good, I might even have a go!

As if I hadn’t already traversed the country a couple of times, I spent Saturday on the road to Perth and back with Jane and a small group of young people who were attending the Provincial Companion Links Day where we were talking about our link with Quebec. I think they all enjoyed themselves and began to get to know each other a bit better.

The week ended with a trip over to Aberlour for a very special event. The war memorial in the grounds of St Margaret’s Church was erected in remembrance e of the former residents of the Aberlour Orphanage who died in WW1. The memorial has been restored by the Trust with the help of government money, this was the day I was to rededicate it. The church was packed, the local parish church had closed for the day and had all come up the hill to join us, former residents of the Orphanage arrived and local community leaders squeezed in. At the end of the service I led them all out into the grounds where we placed named crosses in the ground around the memorial, one cross for each of the 62 young men who were killed on active service, 62 from this one community in the hills of Strathspey.  When we went back into church we watched a video which showed actors reading the letters that the boys wrote to the Orphanage while they were at the front, amidst all the mud and pain they wrote fondly of those who had cared for them, they sent money to buy treats for those still at the home. I found myself weeping as I realised that as they spoke of the choir and the services and their friends, I was sitting where they had sat and I had remembered their names on the memorial outside.