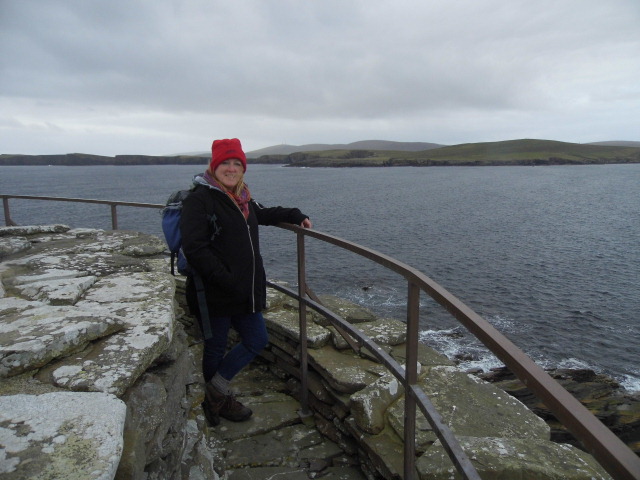 I was making a trip to Shetland as part of my ministry to the people of the Diocese of Aberdeen and Orkney. A tradition has developed in which a Chrism mass is offered in one or other of the Northern archipelagos each year, this year it was to be in Shetland, at St Magnus’s Church in Lerwick. The trip also had something of a family pilgrimage about it as my parents had lived in Lerwick long before I was born, and in fact my sister Peta was born there.

We boarded the boat in Aberdeen and watched the very familiar skyline of the city drift past as we headed out into the North Sea, we kept watch on the distant shore line as we travelled North but eventually it was time to sleep!! I tried but the POD I was lying in was both too narrow and too short, or in another way I was too large, I didn’t sleep well at all, Jane who is smaller in all directions slept well. The boat arrived in Lerwick in the morning and after breakfast on board we headed out to explore.

We spent the day on the Western side of the mainland exploring historic sites before driving into Scalloway and to Midshore Guest House, our home for the next few days. We just had time to visit Scalloway Castle before night began to fall and we headed off to the Scalloway hotel for a great evening of food and chat.

On Wednesday we decided to visit one of the sites I had always wanted to see. We sailed in a small boat across to the Island of Mousa and the wonderfully preserved Broch that sites on the shore. We had a good day walking around the Island and climbing to the top of the Broch. When we reached the mainland again we drove down to Sumburgh and visited the truly remarkable Jarlshof, an historic site overlaid century upon century by new communities.

Thursday was the big day, we drove to the North to the ferry point at Toft and then boarded the ferry to Yell, drove across Yell and onto the next boat which sailed first to Unst and then to Fetlar. As we drove onto the last ferry, I met the local Church of Scotland minister (though he is actually a Methodist) The sisters who once lived on Fetlar but are now established on Unst also drove on led by Mother Mary Agnes.

We all then drove to the Glebe House where Rev Graham Booth and his wife have made their home and a space for retreat and quiet times.  On the third floor they have created a small chapel which I consecrated in a lovely and moving service surrounded by local people of faith. We had time on the way back to drive down the old road on Yell to visit St Colman’s Church, Burravoe, the most northerly Scottish Episcopal Church.

That evening we joined a gathering of clergy, lay readers and members of the churches across both Orkney and Shetland. We worshipped in St Magnus, Lerwick, the clergy and Lay readers renewed promises, oils were presented and blessed and we all shared the sacrament while the choir sang a beautiful motet, we had a great evening. Jane and I rounded it off with chip suppers eaten as we looked out over the ocean.

Our last day on the Islands was bright, sunny and very windy, we drove down to St Ninian’s Isle and had a great walk across the tombolo as the waves crashed and the wind blew. Then I thought, we are sailing this evening, go away wind! It didn’t and as Jane sat in the bar with a glass of red I groaned in our cabin.