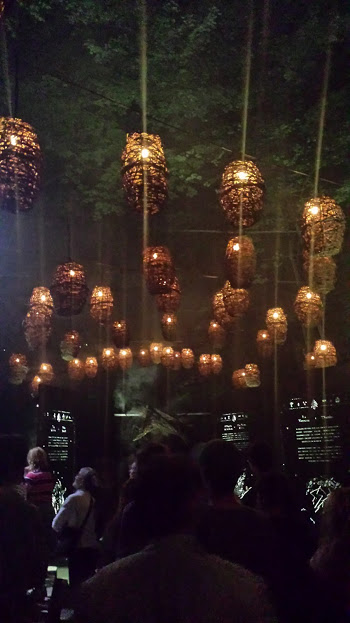 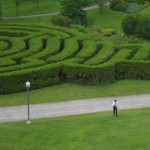 After walk around the Parc, a run around the maze, a climb up the observation tower and a paddle in the pool we headed back to the bus stop, a journey that took us across the railway line and another culture shock, the railways have no fences around them! 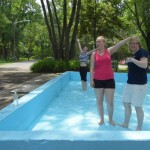 The bus then took us to the Montmorency Falls, a really spectacular waterfall which drops over the cliff before entering the St Laurence. The falls are crossed by a suspension bridge and have a very long flight of steps to take you down to the bottom, there is also a cable car for those who would rather save energy. We walked down the steps and back up them so that +Mark could get a photo of us getting below the falls, we all managed easily, he didn’t! 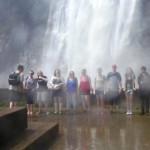 We were picked up by the car convoy and taken over to the Isle D’ Orleans for a barbecue and get to meet you session at the farmhouse owned by the Blair family. Some of us went swimming in the open air pool and we all met Aldo the Donkey who usually lives at Bishopthorpe but has his holiday here every summer. After a great feed we played some games and then set off back to the city and bed.

We headed for the Eastern Townships on Wednesday. We were staying at the Rectory of St George’s Lennoxvillle the home of Fr Edward Simonton, Archdeacon of St Francis and former ordinand at Coates Hall Edinburgh. Many of us already knew Fr Edward from his time with us two years ago. The drive over took much of the day as we explored the villages and towns alongside the river. The evenings fun started with a barbecue and lots of watermelon, then we were joined by members of the deanery congregations who came to listen to a talk on the history and life of our Diocese and to ask us questions. They asked a lot of questions and then spent time chatting to us all.

On Thursday we woke to a great breakfast, left over puddings from the night before and left over pizza, most of us loved it! We then drove over to North Hatley to visit St Barnabas’s Church and the most amazing antique shop, from there we drove to Magog and alongside Lac Memphremagog until we arrived at Abbaye De St-Benoît-Du-Lac, a large and very impressive Benedictine monastery.

Then we headed onwards until we reached Stanbridge East and the home of Ven Peter Hannen, another swimming pool, a game of Croquet and a dinner of artisan, Canadian sausages! From here we drove on to Coaticook and the annual Foresta Lumina – a light illuminated night time pathway through a dramatic gorge, telling a story by hologram, lights and voices. It was as magical as it was brilliant. 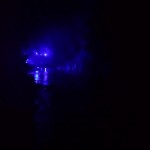 Back to Quebec City on Friday and an afternoon of free time for most of us and more meetings for +Mark. By now the heat was amazing and many of us were looking for sheltered places to sit and swelter. We had another barbecue this evening, this time at Jill Marrack’s – great food, really good chat and lots of very happy pilgrims.

Saturday was a day that will remain with us for a very long time, we caught a coach to Baie St Catherine and after a three hour drive along the Northern shore of the St Laurence River we arrived at the jetty. We all got into our floatation suits and headed down into the Zodiac Boats. The day was overcast and the rain started but that didn’t matter as we began to see whales surfacing and diving a around us, we saw Fin Whales, Minkie Whales and Baluga Whales, it was brilliant, moving and inspiring. After three hours on the water we drove back to Quebec city as a huge electric storm crossed over, the lightening was spectacular. 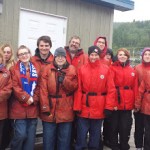 Back at Jill’s we were joined by some members of the Cathedral Congregation as we were treated to a traditional Quebec meal. Poutine (chips, gravy and curd cheese) pea soup, Pâté Chinois, Tourtière and rhubarb pie and sugar pie with maple syrup! A Feast!

On Sunday +Mark preached at the morning service in the Cathedral and Jamie sang in the choir. We thought about and prayed for the Diocese of Bujumbura and the difficult times they are experiencing . The choir sang a lovely setting of the Deep Peace prayer in our honour and + Dennis and +Mark processed together to send us out as friends and pilgrims, a very moving and thought provoking ending to our worship together.

In the afternoon many of us explored downhill Quebec and we also prepared ourselves for the delights of moose stir fry, it was really delicious! In the evening we attended a performance of the theatre group resident at Bishops house where we were treated to a cabaret by the talented young people of the Diocese of Quebec and their musical director Aidan Strange . The wonders of nature, music, companionship, worship and food!